Bullying, Self Defence and The Rule of Natural Justice | NFPS Ltd Skip to content 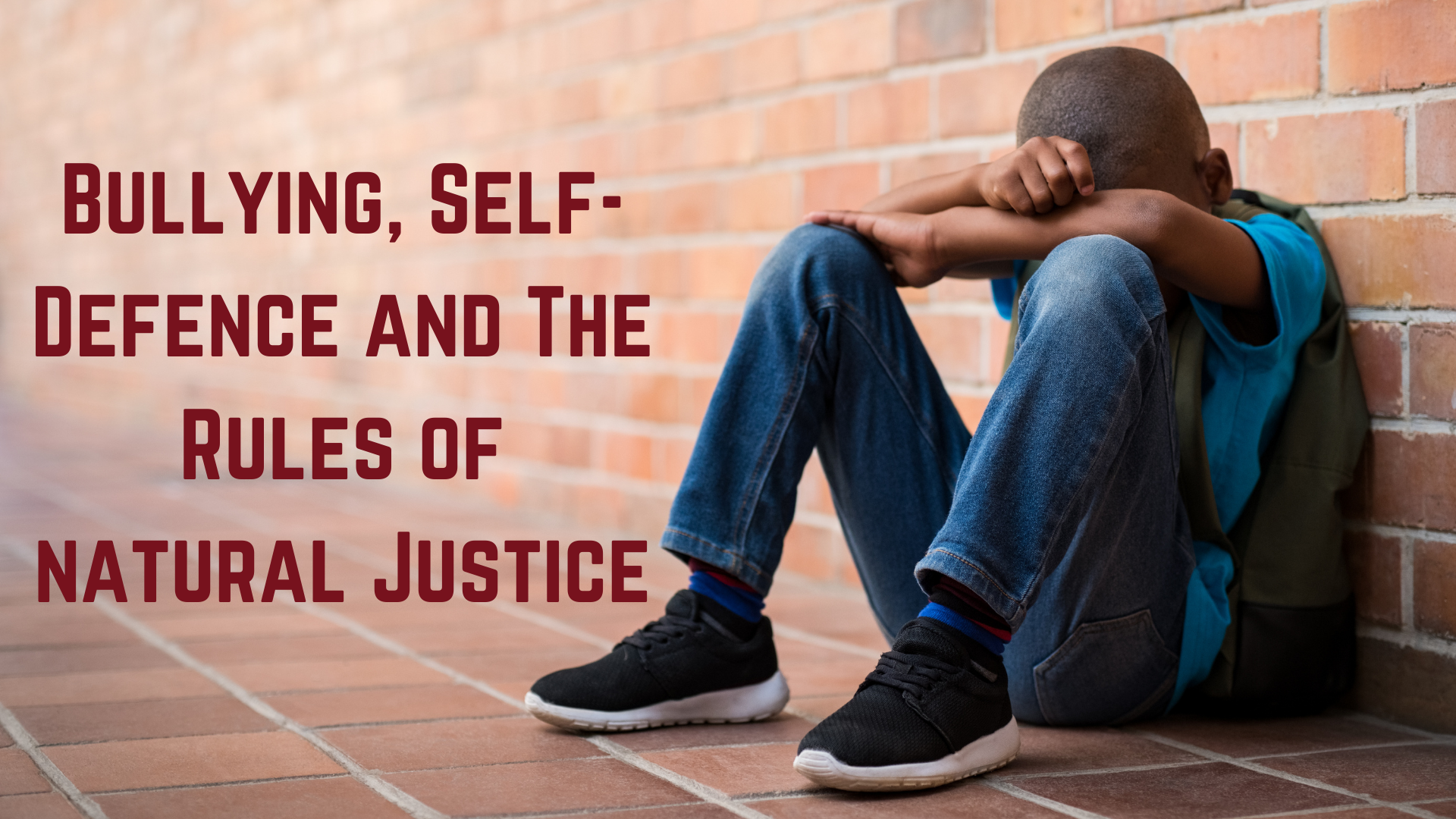 Bullying, Self Defence and The Rule of Natural Justice

As it is National Anti-Bullying Week, I thought I’d share this post with you to highlight the fact that a victim of bullying has a right to defend themselves, which can’t be taken away from them. However, many fear the reprisal that may come their way if they act, so they put up with the abuse and harm and adopt a state of learned helplessness/paralysis.

Bullying also goes way beyond the actual event and stays with people for many years. Often into adulthood. It can lead to depression and in extreme cases, suicide.

And in some cases schools and other agencies who fail to adequately deal with it fail the victim by being negligently complicit by omission in the act itself.

The following is the content of an email I was sent asking for my opinion on it, which highlights the points made above.

The Email I Received

I welcome your thoughts on this. Partly I am genuinely after some advice that I can pass on. Partly you’ll likely turn this into a blog post and that’s great if more people benefit.

It has been argued that in self protection situations there are two battles; the actual event and then the aftermath. The aftermath may be explaining your actions to the Police or dealing with the ”black dog”. Now we know that there is some truth in this argument although it’s more… nuanced than that. The notion of “better to be tried by 12” is outdated.

However something that I’ve been forced to consider is the parallels with childhood bullying. As someone who did personally experience childhood bullying, as a nurse who has treated the victims of bullying and as a martial arts instructor teaching the recipients of bullying I strongly believe that the second battle is a genuine and current phenomenon. Frequently the victim will fear less their actions and more the reprisals.

My student or patient’s parents and I will be in congruence in educating the victim that they CAN use the skills I’m giving them and they DO have a right to defend themself including pre-emption. However this is in opposition to the post-event information that they get from teachers. Granted the problem is muddied by the bullys’ lies.

In my view this is the single biggest challenge in bullying. And I don’t have an answer.

My juniors understand that they CAN act but they need to be able to explain why and what action they took beforehand. But this falls on the deaf ears of the teachers.

My response is as follows:

Your explanation of ‘the second battle’ in terms of the victim fearing less their actions but more the consequences of their actions I believe is very true.

I have been involved in helping parents (on more than one occasion) challenge schools where their child was being the victim of bullying and abuse by other children.

In one case the school told the parents that their child may be suspended from school because they fought back which is against the schools policy on not encouraging violence.

I raised the point that the child had been the victim of bullying on numerous occasions and that the school, by failing to deal with it adequately (because the school has a non-exclusion policy), was negligently complicit (the act of helping someone else behave inappropriately and possibly illegally) in the bullying itself and had failed in the duty of care owed to the child under various laws.

The Rule of National Justice and Fairness

According to Roman law, certain basic legal principles were so obvious that they should be applied universally without the need to be enacted into the law.

The rules of natural justice are now regularly applied by courts in both common law and civil law jurisdictions.

Natural justice operates on the principles that man is basically good, that a person of good intent should not be harmed and one should treat others as they would like to be treated.

I also reiterated the points you make that the child does have a legal right to self-defence and that can’t be taken away from them by the school and the child (as is everyone) is protected by the ‘Rules of Natural Justice and fairness’ (which has since been re-upheld and bolstered by Article 6 of the European Convention on Human Rights which is incorporated into our domestic law).

Even where no actual bias exists, investigators and decision‐makers should be careful to avoid the appearance of bias. Investigators should ensure that there is no conflict of interest, which would make it inappropriate for them to conduct the investigation.

Further to that the rules of natural justice impose that the deciding body is to be free from bias and that any investigators should ensure that there is no conflict of interest, which would make it inappropriate for them to conduct the investigation, which the school was not exhibiting by not excluding the bullies and by threatening to exclude the child who exercised his lawful right to defend himself.

I believe that if we don’t stand up for our rights we allow other people to take them away and what we end up with is ‘learned helplessness’ or ‘learned paralysis’ which is a state that occurs after a person has experienced a stressful situation repeatedly and end up believing that they are unable to control or change the situation, so they do not try. This is why what you so rightly state is true, that “Frequently the victim will fear less their actions and more the reprisals”.

In essence they fear so much about what others (teachers, police, people in positions of authority, etc) may say or do to them that they will put up with the indignity of being abused, threatened, bullied and even physically assaulted.

However, learned helplessness can bring on depression and ptsd and in extreme cases suicide. So these people who stand by and do nothing are literally allowing this to happen.

The reason I am so passionate about this is because someone very close to me was badly bullied at school as a child and when I found out I threatened the school with everything because they had been complicit in allowing it to happen in a big way.

No one has the right to take away anyone’s rights and people and organisations who fail to look after those in their care need to be held to account for the damage they allow to be caused, which goes on long after a child leaves school.

This poem by Martin Niemöller who was a Lutheran minister and early Nazi supporter who was later imprisoned for opposing Hitler’s regime says it all:

“First they came for the socialists, and I did not speak out—because I was not a socialist.

Then they came for the Jews, and I did not speak out—because I was not a Jew.

Then they came for me—and there was no one left to speak for me.”

You don’t have to go begging, cap in hand like some Victorian beggar, in the hope that someone will uphold your human, civil and lawful rights.

If you don’t speak up for yourself and for the ones you love and those who can’t speak up for themselves don’t be surprised when you find that your world has been taken over by self-appointed subjective-making rule-makers.

We all need to speak up when it is necessary to do so and no-one has the right to take away anyone’s human rights and can liberties enshrined in our statute and common law.

So, if you are being investigated for example, regarding a use of force issue by someone who has no knowledge or competent understanding of the law in relation to the use of force, but they are using their subjective opinion to state that what you have done is wrong then that is possibly a biased opinion and the investigation should be stopped.

Just something for you to think about!!

If you are interested in helping others (as I have mentioned in this blog post) why don’t you consider becoming a properly qualified BTEC Level 3 Self-Defence Trainer?

To find out more check out this web-page – https://www.nfps.info/self-defence-trainer-training-april-2021/